Home » Greenroom » The Power Of Plants In The Office

The Power Of Plants In The Office 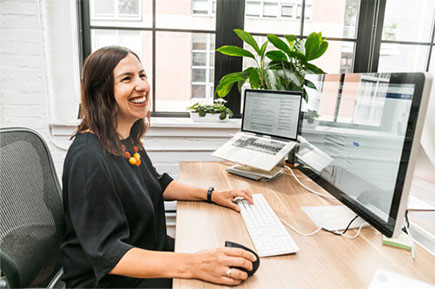 The concept of green office has recently become quite popular in the business world. It doesn’t refer only to smart power management and policies meant to tackle issues of paper waste, it also promotes introduction of greenery to the workplace.

Having plants in the office is valuable for many reasons – they serve as decorative elements and generally improve the atmosphere in the workplace, leading to an increase in productivity.

There are, however, some more obscure benefits which you might not have thought about. This article will list the three most important benefits.

Positive Effects Of Plants In The Office

Fresh air, stress-free working environment and more aesthetic surroundings are all well-known reasons, but three others in particular will probably come as a surprise.

Did you know that plants can actually reduce the amount of background noise in a room?

A scientific study conducted in 1994 by Peter Costa showed that greenery not only filters the air, but it also acts as a sound barrier by absorbing certain frequencies. It turns out that plants can make your office more silent!

Not all plants act in the same way, but the end result is always the same – reduction of background sounds by up to 5 decibels, which is a significant value, especially in noisy business areas in the city.

For the best results, use plants such as the weeping figs, Kentia palms or peace lily.

Believe it or not, plants provide a natural cooling effect in offices. Studies have shown that with sufficient live plants in the work area, the air temperatures can be reduced by as much as 10 degrees.

How? Well, it’s down to the natural process of evapo-transpiration, which is basically how the plant transports water from the soil, into its leaves and then releases water vapour into the atmosphere.

According to a study carried out by Peter Costa at the University of South Bank, London (1994), this moisture cools the air around the plant, and if there are enough of plants around the place, then the room, in general feels cooler.

In fact, it is so effective that staff in the study were noted not to turn air conditioners on, leading to reduced electricity bills.

We are all aware of the term ‘sick building’, used to describe an office when absenteeism due to illness is particularly high. But did you know that by bringing real plants into the office, the number of illness-related absences is reduced.

Between 1994 and 1996, a study by Prof. Tove Fjeld of the Agricultural University of Norway concluded that plants in a working environment had a positive effect on the health of employees.

In fact, over three months at the Norwegian State Oil Company, Statoil, there was a 30% reduction in the number of reported cases of fatigue noted, as well as a 20% reduction in headaches, 40% reduction in coughing and 25% fall in cases of dry facial skin.

It seems there is a lot more to plants in the office than just the feeling of being close to nature and the aesthetics of having some greenery around the place. You get a quieter, healthier and cooler office too!

If the information provided in this article convinced you that you need to make your office green, consider Alsco’s Odour control services. Alsco’s air fresheners, sanitizing units and ozonizers will help you in the quest of refreshing your office space.

A clean office means a healthy environment for you and your employees to work in. Air fresheners will work automatically and keep your workplace fresh at all times.

Contact Alsco and see what you can do to improve the air you breathe!

Get the best quality, crisp, 100% cotton and highly absorbent tea-towels delivered to your door.

You have Successfully Subscribed!