8 Unusual Things You Should Know About the Chef’s Uniform 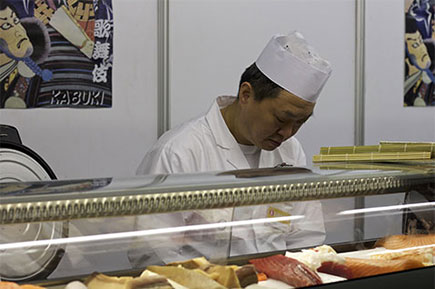 Have you ever admired the chef’s uniform?

Well, it has some fascinating history behind it. The chef’s iconic outfit came into existence in 1822 when Marie-Antoine, a French artist published a sketch named Le Maitre d’Hotel Francais.

The portrait had two chefs wearing trousers, the toque, an apron and a double-breasted jacket. Strangely, this setup didn’t become fashionable in the hospitality industry until 1878.

Although what modern chefs wear today is a less formal version of this early prototype, there are many of the same features found in their contemporary uniform. Here are some unusual things you should know about the chef’s uniform.

Reasons Why a Chef’s Jacket is Double-Breasted

The chef’s jacket is an integral piece of the uniform. It sets apart a chef from an ordinary cook and chefs have used it for centuries. It serves various functions, including keeping chefs safe from the dangers they encounter every day in commercial kitchens.

The jacket is basically made with the chef’s safety in mind. It’s made of fire-resistant thick cotton of the finest quality. Its sleeves are long to protect a chef’s arms from hot oil and other burns.

Although the jacket cannot entirely protect a chef from accidents, it does a marvellous job of protecting the wearer from steam. Its thick fabric can also protect the chef from injuries caused by sharp kitchen tools.

The jacket also helps protect the chef from severe burns caused by scalding liquids. The reasons why it’s double-breasted include:

Although some may think that a chef’s jacket is just another uniform, it’s more about safety and projecting professionalism. So it should be accorded with the respect it deserves. Which is why Alsco has made it their mission to ensure your chefs have clean and hygienic chef jackets.

We do all the work for you including cleaning, repairing and delivering clean chefs’ uniforms, freeing you up to focus on running a restaurant.

The buttons used on the chef’s jacket are also different from those found on button-down shirts.

Instead of metal or plastic buttons, a chef’s jacket comes with knotted-cloth buttons, known as French knot buttons.

These buttons don’t break easily. The way the cloth is constructed prevents buttons or their pieces falling into the food.

These buttons also slip loose better than the common hard ones.

This makes it easy for chefs to remove the jackets in case they come in contact with hot oil or accidentally catch on fire.

Why is the Chef’s Jackets White?

Ever wondered why the chef’s jacket is white?

White signifies the power and influences the wearer possesses in that position. White is also considered a strong symbol of perfection and cleanliness.

The Chef’s Toque or Hat 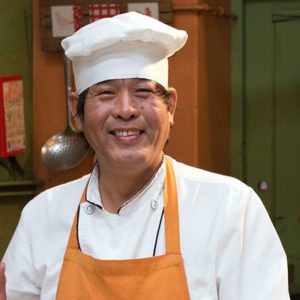 The chef’s toque, or hat, dates back to ancient times.

A few millennia ago, poisoning was common in Assyria. Apparently, people thought it was the best way to get rid of their enemies. This forced the Assyrian royalty to carefully select their cooks.

These cooks were made to wear a crown that had a similar shape to that of the royal family employing them. The only difference was that it was made of fabric and did not have jewels.

Chef Boucher, who always made the Prince of Talleyrand’s meals, insisted that all his kitchen staff wear a white toque. According to him, this signified hygiene and also helped keep the food free of hair while absorbing moisture from sweaty brows.

The chef’s hat also had a column of air which helped the wearer retain a calmness of the head while working in a hot environment.

Chef Marie-Antoine used it to signify seniority, with his head chef wearing the tallest hat. It was rumoured that his own hat was 18 inches tall and it had to be secured for it to remain upright.

Similarly, pleats have their own history. Originally, there was a notion that the more knowledgable a chef was the more pleats their hats had. A pleat may also signify a technique or recipe a chef has mastered. At a time, there were one hundred pleats on a chef’s toque showing the hundred distinct ways a chef could cook eggs.

Although modern chef hats do not come with so many pleats, they still demonstrate a chef’s mastery level. Today, top chefs wear toques that are 12 inches tall while amateurs and apprentices hats are eight inches tall. 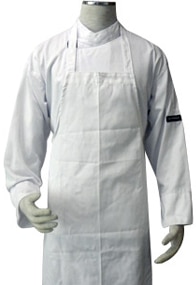 Chefs wear aprons over their jackets and midsection. The apron helps protect the chef and the uniform as well.

Historically, the apron was used to act as a safety measure as chefs cook and reach over huge open flames.

Nowadays, the apron is meant to keep the chef’s uniform clean by protecting the pants and the jacket from spills, stains and scalds.

It can be reversed once while the number of waist string folds can be adjusted to hide stains.

However, the apron should not be made extremely short by folding it excessively.

The Chef’s Side Towel

You must have seen perfectly folded towels hanging around a chef’s waist. They use such towels to shield their hands when removing hot items from the oven or stove. Chefs tuck this towel into a string of their aprons when they’re not using it.

This towel should not be used to wipe things down. If out of instinct a chef uses the side towel to wipe a spill, it should get replaced instantly. Once a side towel becomes wet, it can no longer insulate the chef’s hands. On the contrary, it conducts heat which moves rapidly through the moisture.

Chefs never wear any other pair of trousers. Theirs come in a small checkered pattern designed to help disguise stains. It is impossible to totally avoid stains while working in a busy kitchen, but the checkered pattern can easily make these stains less visible until the chef is able to get a fresh pair.

These trousers are also usually baggy to allow for easy movement while working. They are also airy enough to keep chefs cooler in the kitchen environment.

A chef’s uniform is not complete without the shoes. Chefs’ shoes are supportive, high-quality and protective since they work in accident-prone environments.

The ideal chef’s shoe should be made from hard leather and have slip-resistant soles. Such shoes offer both support and protection.

Chefs are advised to never neglect their feet as this could result in back problems, foot pain and, in extreme cases, permanent injury. Wearing athletic shoes or sneakers might feel comfortable but is not appropriate as such shoes cannot protect them from hot liquids and sharp objects that are common in kitchens.

Get Alsco to Professionally Clean Your Chefs’ Uniforms

The chef’s uniform is an essential element for any successful restaurant. But you need to ensure that your chefs are always looking professional and hygienic in clean uniforms.

Get in touch with us today and find out how we can help you transform your business by providing clean uniforms for all your chefs and other employees.